Have you heard of Fusion Mineral Paint?  I hadn't either until the little shop across the street started carrying it.  All I can say is this stuff is amazing!

I purchased this chaise at a vendor mall for $35.00.  I had visions of my greyhounds chilling on it all stretched out.  Not to mention, it would make a comfy place to relax and read.

This ugly chair must have been a good one in it's prime.  The cushions are down inners with ticking outside.  I purchased some good quality cotton for the cushion covers since it won't be used that much.  Plus it was cheap!  The zippers were recycled from the original covers.  Apparently someone chewed the piping on the covers in it's previous life, so I had to make new ones.  All in all, I am pleased with the piece.

Long Time No Hear From

Well friends, it seems like ages since I have blogged here.  Probably because it has been FOREVER!

Lots of things have been going on here.  My grandson is now almost 6 years old and will be starting Kindergarten in the fall.  If you think time flies when you children are little, it goes even faster when you have grandkids!

Personally I have been fighting the battle.  The cancer battle.  I will give you the short story. 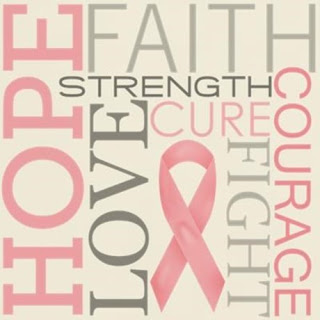 On October 31, 2016 I went in for a routine mammogram.  I have been having mammograms since I was 27 (that's a long time, by the way) due to fibroid cysts.  After having to go back in after the results were read, I decided a few years ago to just stay in my robe and wait for the results.

This time, I just kind of had a nagging fear in the back of my head.  But here comes the tech, calling me back for more views.  Not quite my idea of a good time.  This mammogram device was surely invented by a man who was trying to get revenge on some woman.

The radiologist read the new views and decided there was something suspicious.  I was scheduled for a needle biopsy two days later.  Nothing worse than waiting, especially when you are waiting for that kind of news.  On Friday I finally received the call.  The doctor said the results were inconclusive and it now became a surgical issue.

On November 14, 2016, I underwent the knife for a lumpectomy.  Again, the lab here got inconclusive results.  By this time, my nerves are shot.  More waiting.  When I went for a follow up with the surgeon, he had just gotten the results.  It was cancer.  Pure tubular carcinoma of the breast.  Thankfully, my surgeon got clean margins and no further surgery was needed.  He also said he had to give massive credit to the radiologist as this tumor was so small, and on the chest wall, that he was surprised it was even detected.

To say this experience has changed me, would be an understatement.  To be faced with your own mortality is very eye opening.  I'm positive I can say I have kicked cancer in the ass.  You can't get rid of me that easily!
Posted by Mad Red Hare at 10:59 AM No comments:


My father passed away in 2007 and one of his favorite past times was his Lionel train collection.  This was no run of the mill collection, his love of trains occupied the entire attic of our big old house.  Warning, post contains a lot of pictures.  I hope you enjoy! 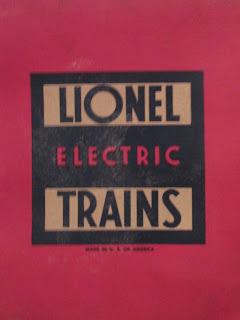 Aunts and Uncles told us that my dad had started collecting after his days in the Marine Corp.  At that time, he had his trains in the attic at his parents house in downtown Indianapolis.  Mom and Dad's first house was a tiny ranch, and with 3 young kids, there definitely was no room for them there.  When I was 6 years old, my parents purchased an older home about 4 miles east of downtown Indianapolis, just off of Washington Street.  Finally, my dad could have his trains in his own home.
In 1983, my mother decided to leave the marriage.  Dad had a bit of a hard time adjusting to single life and went through a period of depressions.  Even his beloved trains couldn't help.  Finally in 1985 he met a lady.  In 1986, he prepared to sell his house and packed up his trains.  I know this from the newspapers he gently wrapped his collection in.

My stepmother relinquished dad's collection about 4 years ago.  To me.  When they first came, I went through the 11 totes and boxes.  There were empty boxes and I searched out the corresponding trains and put them back.  At the time, I was still a bit grief stricken, so back to the garage they went.  I didn't tell my brother and sister as I had intended to make it a surprise for them for Christmas.

Fast track to today.  I was cleaning out my garage last week and decided it's time to get them out of those totes and let someone enjoy them.  There are literally hundreds of trains.  Diesel and steam engines, box cars, coal hoppers, caboose. etc.  Buildings, some metal and some hand made by my dad. 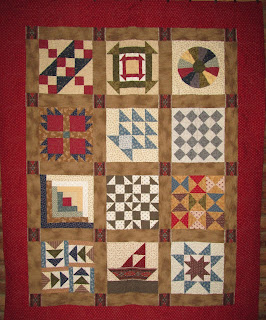 Several years ago (I'm too embarrassed to even tell you how many) I attempted to do a block of the month follow along for this Underground Railroad Sampler quilt.  I think I only managed a few posts and I finally got mine finished. 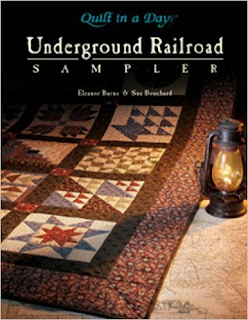 I got my pattern from the Quilt In a Day book titled Underground Railroad Sampler.  The stories behind the blocks are amazing and I really enjoyed making this one.  I was able to complete this quilt using my scraps.  This really got me thinking about how they used to make their quilts out of necessity back in the day and not just for fun.

In my attempt to plan menus better this year, I decided to reach into my recipe box and try some old favorites.  This slow cooker recipe for Continental Chicken is from my original crock pot book.  I won't say just how old that is, but I'm sure in some circles it's considered "vintage". 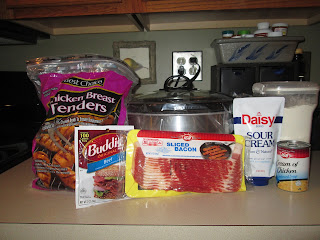 Arrange dried beef on the bottom of greased slow cooker.  Wrap chicken breast with bacon and lay on top of dried beef.  Mix soup and sour cream/flour mixture together and pour over chicken.  Cover and cook on low for 8-10 hours or high 3-4 hours.  I usually serve this over a bed of rice or noodles along with green beans or broccoli. 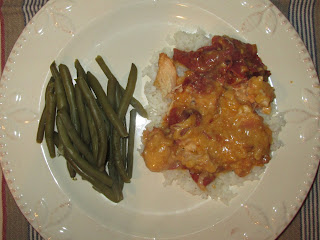 We have this huge blue pole barn along the side of our back yard.  Not my favorite thing to look at, that's for sure!  This spring I finally got a start on trying to make it less of an eye sore.

One thing we have around here that I do love are dragonflies.  Even though it's early in the season, they are already making their appearance.  In the summer I love watching them hover above the pond and flit around the yard. 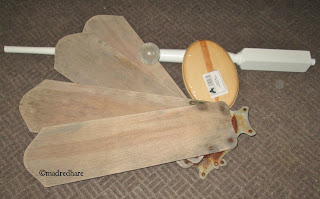 I gathered up some "junque" to make my own version of the dragonfly.  Some fan blades, a spindle, white paint, screws and a few eye hooks. 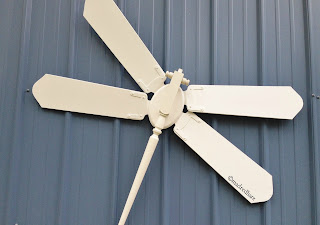 I love how it turned out!  I wound up using some old insulators for the eyes instead of the glass globe in the previous picture.  Not quite sure if you can judge the size by the photo or not, but the wing span is almost 4 feet. 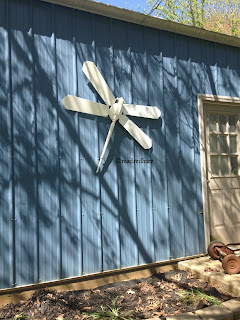 Stay tuned for more junque decor on the pole barn! 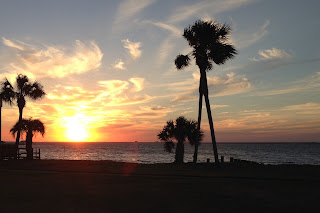