These two families of turkeys pass through our yard a couple of times a day. 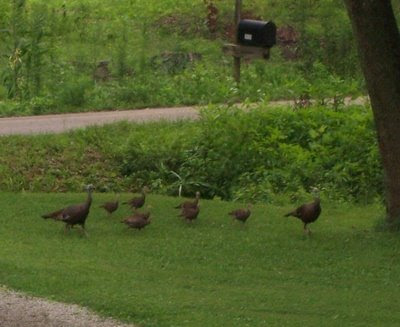 There is one chick tucked behind the turkey on the left, but all in all, there are 8 babies. A couple of weeks ago, there were about 12. I don't want to think about what happened to them. Not that turkeys are cute, but I guess they are cuter when they are babies.

It is so hard to believe that the county fair has already come and gone. I always think I am going to have so much to exhibit, and then never really do. This year I entered what I call my Christmas Sheep quilt. This is one of the few that I have actually hand quilted myself. I just took a couple of close up shots, this is a pretty big quilt. I received a blue ribbon for this quilt. 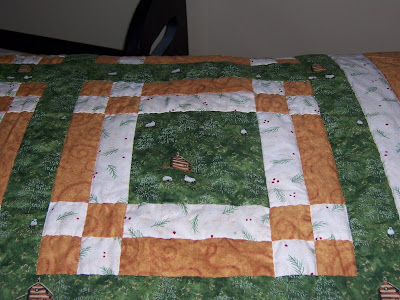 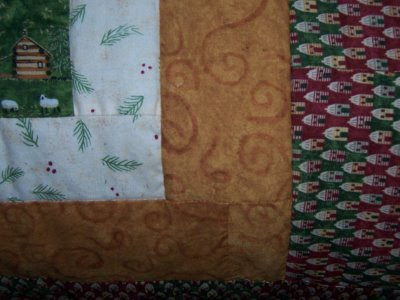 This little tote bag was something I started last summer. Of course, true to the 4-H way, I finished it up the night before I had to turn it into the fair. I am not so crazy about how it turned out. But I got a blue ribbon on this bag and it also won the grand champion in this particular category. 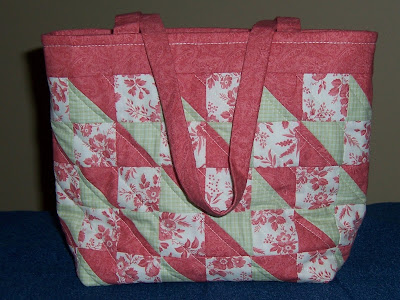 Next up is a Santa that I painted on a pelt board. Trappers used these boards to nail their pelts on to dry. He is a fisherman Santa. I had to take the picture outside, the flash kept putting bright spots on it. The little whale is jumping through a green wreath. I got a blue ribbon on this as well. 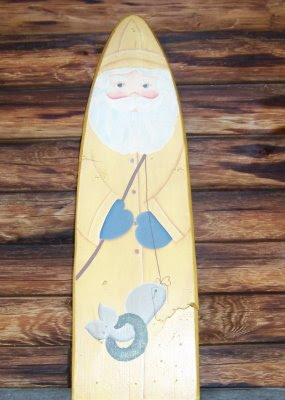 And last but not least. My absolute favorite exhibit. My finger. 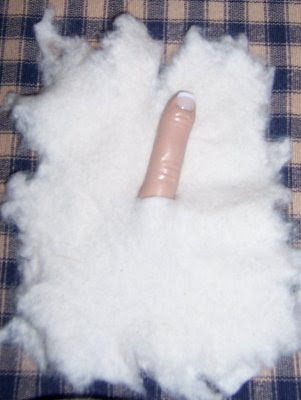 I mean, my finger spreader! I think this looks so real. I used flesh colored Sculpey clay, with an artificial fingernail. I think this will be so much fun for Halloween! I got a blue ribbon on this too. I hope the judge remembers this for a long time. 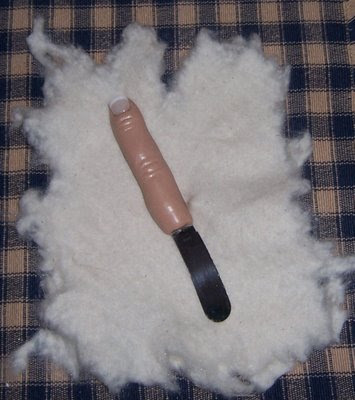 My Trip to Waverly Hills Sanitarium 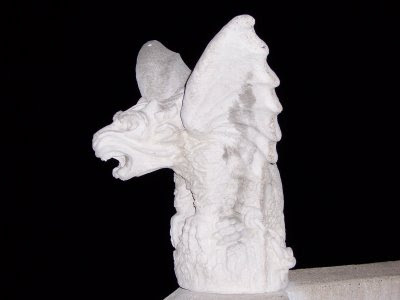 I have lots of blogging to catch up on now that I finally have my internet back. The first thing I wanted to start with is my trip to Waverly Hills Sanitarium in Louisville, Kentucky. All I can say is WOW. This was quite an experience. I have believed most of my life in the "paranormal", and this trip just helped validate it.

The history in this place is unbelievable. More importantly, how many people lost their lives here. Some estimates are as hight as 64,000 deaths. Waverly Hills was a tuberculosis hospital. In its prime, it could hold between 400-500 patients. It has a body chute that was used to transport bodies downhill to waiting hearses and train cars. They say at its peak, one death occurred every hour. So they made this covered tunnel, to try to keep up patient moral.

The picture of the gargoyle was taken from one of the balconies. It was so hard to get pictures because it was so dark there. Our tour started at midnight and went until 4:00 a.m. So when you tried to take pictures, you just had a view of black in your viewfinder. So it was just take a picture and see what you got.

Ghosthunters fans may have seen an episode about this place. Like Timmy playing with the ball that was left in the hallway. We had this experience. We found a ball and rolled it down the hall. It went into a room and then came back out on its own. Honest! We took our flashlights and went in there to see if there was a slope in the floor and there wasn't. We also took the ball back out in the hall and laid it in an indention in the floor. It moved several times. Like someone had their hand on top of it and was just moving it back and forth. The picture below is of one of the rooms that faced out toward the sun porch. Notice the ball in the upper left corner of the room? This is one of the many balls that are left for "spirits" to entertain themselves with. 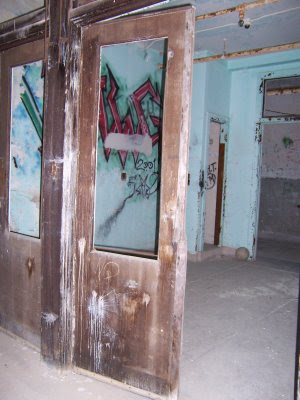 This was my first visit, but my stepsister and her friend had been there twice before. So they knew a lot of the history and had some pretty good stories to tell of past experiences they had there. I am definitely going back, just not sure when.
P.S. I THINK I WILL BE DOING A GIVE AWAY FOR MY 200TH POST! ONLY 18 MORE TO GO!!!
Posted by Mad Red Hare at 11:51 AM 2 comments:

Folks, almost two weeks later, I still have no internet. No one at AT&T can seem to solve my problems. I guess it would help if their employees could READ! I hope none of my bloggin' friends work for AT&T. I really hope this gets resolved. I am in total withdrawal and I have so many blogs to catch up on.

My big news! On July 4th my husband gave me our 30th anniversary gift early. A trip to MAUI. I was totally shocked. How can this be? I never imagined I would ever get to see Hawaii. Much less spend 7 days there. We leave on September 11th, plus he talked some friends of ours into going along! I can't wait. Well, that's all for now. I have so much to catch up on. Hope to be blogging regularly again soon!
Posted by Mad Red Hare at 11:59 AM 5 comments:

Almost a week later, and still no internet. Sorry friends. I am currently at the hospital, mom had back surgery this morning. So I have a little time to catch up. Hope to post soon...
Posted by Mad Red Hare at 1:01 PM 1 comment: 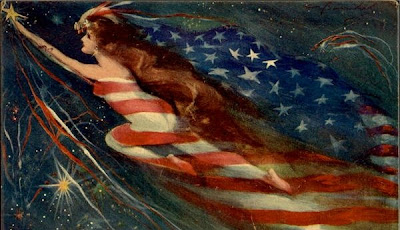 My friends I thought I would wish you a happy 4th of July a bit early. It seems good old AT&T has done it again. I am without internet. I have only been with them since February and I have had nothing but problems. They now tell me that I have never had internet service with them. Um, hello, have I not been blogging? By the end of the day, I was so angry, I hung up on them. I never do that. And how about we hire some of the unemployed Americans to work the customer service telephones. I am really getting annoyed by these people who you can't even understand. I understand they need jobs in their countries too, but so do a lot of people here. Okay, I am climbing down from the soap box now. Have a good weekend!

P.S. I am going on a ghost hunting expedition in Louisville, Kentucky tomorrow night. The Waverly Hills Sanitarium. I'm sure I will have lots to write about, well, if I have internet service!
Posted by Mad Red Hare at 7:33 PM 4 comments: